back to GARF News 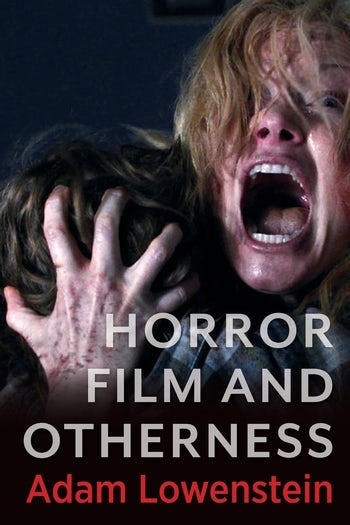 What do horror films reveal about social difference in the everyday world? Criticism of the genre often relies upon a dichotomy between monstrosity and normality, in which unearthly creatures and deranged killers are metaphors for society’s fear of those “others” that threaten the “normal.” The monstrous other might represent women, Jews, or Blacks, as well as Indigenous, queer, poor, elderly, or disabled people. The horror film’s depiction of such minorities can be sympathetic to their exclusion or complicit in their oppression, but ultimately, these images are understood to stand in for the others that the majority dreads and marginalizes.

Adam Lowenstein offers a new account of horror and why it matters for understanding social otherness. He argues that horror films reveal how the category of the other is not fixed. Instead, the genre captures ongoing metamorphoses across “normal” self and “monstrous” other.

This “transformative otherness” confronts viewers with the other’s experience—and challenges us to recognize that we are all vulnerable to becoming or being seen as the other. Instead of settling into comforting certainties regarding monstrosity and normality, horror exposes the ongoing struggle to acknowledge self and other as fundamentally intertwined.

﻿Horror Film and Otherness features new interpretations of landmark films by directors including George A. Romero, Tobe Hooper, David Cronenberg, John Carpenter, Stephanie Rothman, Jennifer Kent, Marina de Van, Jerzy Skolimowski, and Jordan Peele. Films analyzed include Night of the Living Dead, Martin, The Texas Chain Saw Massacre, Poltergeist, The Omen, Halloween, The Shout, The Brood, Scanners, The Babadook, The Velvet Vampire, In My Skin, Rosemary’s Baby, The Wolf Man, and Get Out. Through close analysis of their engagement with different forms of otherness, this book provides new perspectives on horror’s significance for culture, politics, and art.

Adam Lowenstein is a professor of English and film studies at the University of Pittsburgh. He is the author of Shocking Representation: Historical Trauma, National Cinema, and the Modern Horror Film (2005) and Dreaming of Cinema: Spectatorship, Surrealism, and the Age of Digital Media (2015), both published by Columbia University Press. Lowenstein serves on the board of directors for the George A. Romero Foundation.